A Difficult Type of Forgiveness

Christianity 101 teaches us that God has forgiven us by Christ's work of the cross through faith. The Bible makes it very clear that once we believe upon Christ our debt is canceled out before the Lord permanently.

This is great news. Seriously, to ponder the reality that Jesus died for me while I was in sin in rebellion against Him is overwhelming at times. In some ways I find accepting God's forgiveness is easier than it is for me to forgive.

Forgiveness is not all equal. Some things are easy to forgive. Others are very difficult to forgive. Yet in all of this, Christians are commanded to forgive--this is not to say that there is a difference between consequences and forgiveness, but this is for another post. I have been a Christian for about 15 years now and I have found there is one particular type of forgiveness that is difficult to give. As a pastor, I have seen others struggle with this particular act of forgiveness...so in some ways I am comforted to know that I am not alone and compelled to address this.

What is it? I am glad you asked. Let me lay out the very basic steps, or process of becoming a Christian through my own life:

1. I realized or felt the weight of my sin. I realized that my sin separated from God. I needed a Savior to rescue me.

3. I believed or trusted in Him ultimately accepting this gift He was offering to me (see Eph. 1:13).

4. At the moment of belief, I was seal by the Spirit and my new life in Christ began.

From the moment of my conversion I struggled with a particular kind of forgiveness--forgiving myself for the things I had done and the condition of my heart before becoming a Christian. For years I struggled with guilt, shame, unworthiness of being forgiven, and remorse for my attitude and behavior before God. Yes, I understood that He forgave me, but that didn't mean that I had to forgive myself. I was happy that God let me off the hook, but I wasn't going to let myself off the hook so easily! I was going to pay for it.

My inability to forgive myself was killing my spiritual growth and development with the Lord. I am convinced this tactic is often used by Satan to keep Christians on the sidelines. I really struggled with the idea that the Lord could use me with all my short comings and iniquities. I remember going to Bible college not for the purpose of going into the ministry, but because I wanted to simply learn more about the Bible. Internally I was digging in my heels resisting God's leading because I wasn't done "forgiving myself" for my past debt.

It eventually dawned on me that I was not let off the hook without punishment. The punishment due me was paid in full. It was placed upon Christ in full. I needed to lay it down there and realize that He did forgive me. How in the world could I not forgive me? This may seem a bit silly, but this pain was real.

Eventually, one day, I discovered a verse that I would continue to draw upon for many years. It is Philippians 3:12-14 which says, "Not that I have already obtained all this, or have already arrived at my goal, but I press on to take hold of that for which Christ Jesus took hold of me. Brothers and sisters, I do not consider myself yet to have taken hold of it. But one thing I do: Forgetting what is behind and straining toward what is ahead, I press on toward the goal to win the prize for which God has called me heavenward in Christ Jesus."

I highlighted the part that helped me the most. The Christian life is about looking forward--not in the rear-view mirror. The past is the past. Confess it, receive forgiveness, forgive yourself, and press on to glory.

How awesome is that? Pressing forward, keeping our eyes on Christ, and allowing Him to lead us where He pleases is the secret to ultimate satisfaction! I would encourage you to let go of the past and press on towards your upward calling in Christ today. 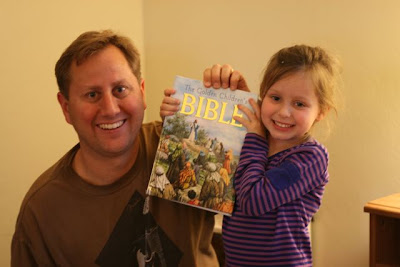 "Furthermore, we had earthly fathers to discipline us, and we respected them...for they disciplined us for a short time as seemed best to them..." (Hebrews 12:9-10). This verse hits me as a dad. I feel like I am pretty good at disciplining my girls in love, but not in perfection. You see, today I made a mistake and lived out the part of this verse that says, "...as seemed best to them." I am reminded of the poster found on Despair.com's website that says, "Failure. When your best just isn't good enough."

Let me explain. So there I was enjoying my Saturday afternoon--studying for a wedding and Sunday's message when I saw something. I saw my five year old daughter intervening with her younger sister. I missed the first part and only saw my five year old with scissors in hand wrapping her arm around her younger sister's neck. I couldn't believe what I was seeing. I immediately jumped in to stop this dangerous action with a firm voice. I immediately sent the five year old to her red chair to await some discipline. She quickly ran off in tears.

After a few minutes of thinking through what I was going to say to her, I went into her room to talk with her about what she did wrong. I started to lecture her about the dangers of what she had done. In trying to see if she understood what I was saying, I asked to to explain to me why she was in trouble. Through her response, I discovered that I, in fact, had translated the events incorrectly as the older child took the scissors away from the younger. I discovered that I was wrong in my actions and my five year old was confused about what she had done wrong. My heart ached.

Wow, I felt horrible. What to do? My initial desire within me was to shrug it off and not take responsibility for my mistake. Following Christ has made me more sensitive to the Holy Spirit's conviction of my wrongs or mistakes. Paul, in Ephesians 6:4, tells fathers not provoke their children to anger. In light of this, I knew what I must do.

I decided the right thing to do was to explain to her that I was wrong, that I was sorry, and to ask forgiveness. She started to cry again. I reassured her that I was wrong and had made a mistake. Through her tears she told me that she loved me and forgave me. Ultimately, we gave each other a big hug and prayed together asking God to help us be the people He wants us to be.

I am so thankful that the Lord has helped me to be a gracious dad that knows how to say, "I am wrong, I am sorry. Will you forgive me?" I want to encourage parents here. You don't have to be perfect. But, when you fail, and you will, you must be able to admit it to your child. Seek God's forgiveness and help. In turn apologize and ask for forgiveness. I can't express to you how much joy it brought to my heart to hear my little five year old forgive me and to pray with me.

Thank you Lord for being so gracious to me.
Posted by Gunnar Hanson at 2:53 PM 1 comments