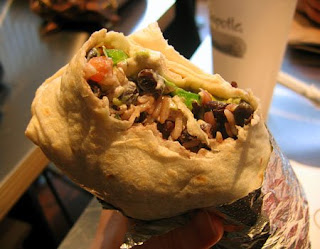 This is a picture of a huge Chipotle burrito. I confess, I am a huge fan--well that puts it mildly. I could eat one of these literally everyday, but unfortunately, I don't.

Sunday evening I found myself in Chipotle, after celebrating my niece's one-year birthday. Going through the line I was placing my regular order--veggie burrito with all the fixins and an extra dose of hot sauce--when I noticed there was a San Diego police officer behind me. When I noticed the officer I got really nervous, adrenaline started to run through my veins...

Okay, you should know I am not a felon on the run...those days are over! :) So why was I so nervous? You see a few years ago I read a book by Steve Sjogren "Community of Kindness" and in it he talks about doing random acts of kindness to bless people as a Christian. This Sunday at church I preached on Ephesians 4:25-32 and there was a verse that essentially says to steal no longer, but to work in order to share with those in need. So there I stood, ordering my grub with this cop right behind me. I was nervous. Do I do it or not? Why would I just buy somebody a meal that I don't know? People will think I am weird or something...

As I reached the cashier, I did it! When the cashier asked, "Anything else?" I said, "Yes, whatever the police officer is having." The officer was very thankful and couldn't believe it. I shared with her that I was a Sheriff chaplain and I was thankful for her service and wanted to bless her. It was amazing to see her demeanor change so radically and so quickly by one random act of kindness!

Try it this week. I dare you. Next time you are in Starbucks, buy the coffee for the person behind you. Look for opportunities to bless people. When they ask why, you simply respond, "God has blessed me and I want to bless you!"

Please share your stories with us as you run this experiment!
Posted by Gunnar Hanson at 7:33 AM 0 comments 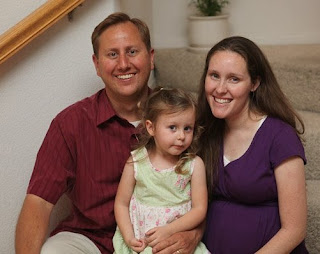 Over the years, there is one question that I get the most: "How did you go from being a Navy SEAL to becoming a pastor?" I will probably write a book one day to answer this question, but today I will try to share my story in brief.

Where to start? Tough question. As I reflect on my life, there are a couple highlights that stand out to me on my journey. The first one has to do with my life early in childhood. I was the sixth of seven kids from a very abusive mother. She had good traits, but it was her abusive side that left the lasting mark in my life. When I was twelve years old, my dad gained custody of me and my younger sister after a long, drawn out court battle.

I lived with my dad and step-mom--who is now my "mom"--from sixth grade until graduation from high school. During these years I struggled in school because I wasn't really grounded in the basics early in my life. Where I lacked an educational foundation I excelled in sports and humor! This was a pretty good ride until my senior year, when I turned 18, and realized that I might not graduate unless I pass a class or two. At this point, I realized my dad was not going to fund me to go to junior college so I could party away my life. The ride was over and I got a little nervous.

Naturally, I needed an easy way out. I had to do something so I could eat upon graduation because I knew, or thought, I would be on the street shortly thereafter. Hmm, what could I do to sustain myself? Ahh, join the Navy to become a SEAL! Now that would be an easy way out...or that is what I thought at the time.

Fifteen days after high school, July 5, 1993, I found myself at Navy Recruit Depot San Diego. Within two years I graduated from BUD/S class 198 (SEAL training) and was off to SEAL Team 3. It didn't take long for me to find trouble. A few weeks after reporting to the team, I found myself in trouble with the law. It was the 4th of July weekend and I was out for a night of drinking with old high school friends. As the night came to an end, I decided to drive home. There is a long story here that lasted about a year and a half, but in short, I ran from the cops, was charged with resisting evading arrest, lost my security clearance effectively freezing my SEAL career, eventually regained my security clearance and went on to serve honorably.

The above paragraph was the low point in my life. I had lost everything and wasn't doing well inside. I drank more to numb the pain, yet it didn't. I had a friend who nagged me--constantly, over and over again--to go to church. I finally conceded under one stipulation: that he would never ask me again to go to church! He agreed and the was really the beginning of the end. This was in 1996.

By 1999, God had a serious hold of my life. I desired to know the Bible with great passion. This passion led me to take correspondence courses through Moody Bible Institute (2000), which in turn, led me to Southern California Seminary to complete my BA in Biblical Studies (2004), which then led to my completing a Masters of Divinity (2006), which then led to my enrollment into a Doctor of Ministry program with I am currently "ABD" (all but dissertation) and who knows if I will ever finish this. 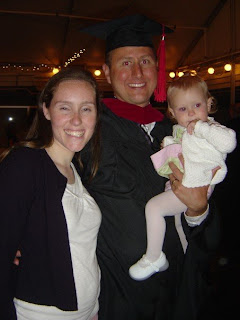 Backing up a bit to 2001, I was a cross roads. Would I reenlist or not? I did for another four years while in Bahrain. I decided that I would ride out my time as a Navy SEAL instructor and complete my college. 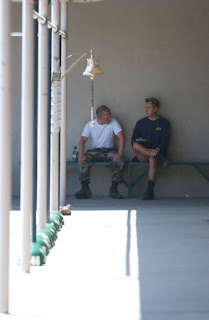 Throughout this last four years I wrestled with what to do. Chaplaincy, missions, continue my career as a Navy SEAL? Should I separate from the Navy? My heart said "yes", but my mind and a bunch of other people said, in essence, "You're crazy! You only have 8 more years to full retirement!" This was a major struggle for me, but in the end, I felt God was leading me to become a pastor and I was to separate by faith. God is good and He has provided faithfully for me and my family since March 5, 2005 when I separated honorably from the Navy.

No regrets, I am loving life as a pastor. Here is a picture from the office with one of my girls! 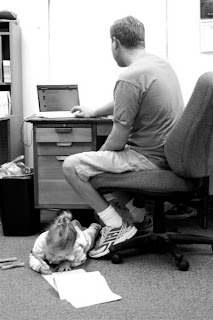 Okay, this is the short version...feel free to ask questions, or add comments. I will expand from there!

What in the World? Mongolia...

Valley Baptist Church believes in reaching the world for Christ. We have partnered with a family serving in Mongolia through New Tribes Mission. It has brought us great joy to partner with them over the last couple years.

My prayer is that we as a church would send a team to Mongolia for a short-term missions trip in 2011 or 2012. In preparation for this, I am heading out to Mongolia, hopefully, in the spring of 2010 for a couple of weeks.

I have been surprised about my anxiety levels over this potential trip to Mongolia. I have traveled the world, yet I toss and turn at night thinking about my visit to Ulanbataar. I am convinced that God wants me to go for a number of reasons:

1. I believe it is important that I be stretched and challenged by the Lord to keep the church healthy.

2. I believe it is important that Valley Baptist Church continually look outward. I don't want the church to become inward focused. The Lord told us to share the Good News with the world and we should!

3. I believe my trip out to Mongolia will be a great encouragement to the family serving there. So often people go overseas in service of the Lord only to find their supporters have forgotten about them. I want our family to know that we really do stand behind them.

4. I am planning on bringing two younger guys with me on the trip this first time. I think this will be a great experience for them to grow.

The positive reasons go on and on. When I consider them, it really makes my concerns about the cost of the trip etc. seem pretty petty. Please pray that God would give me wisdom and courage as I prepare for this trip! Thanks!

Posted by Gunnar Hanson at 7:12 AM 0 comments