Movie Review - The Act of Valor 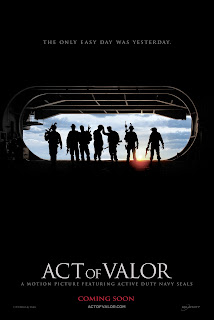 The Act of Valor came out in theaters a week ago today.  Since then, I have been repeatedly asked for my opinion about the movie.  I finally made it to the movies to check it out a couple days ago.  I am not a movie critic and find this review particularly difficult.  My plan is just to sort of lay it out there without much thought.


Initial Hesitations.  Going to this movie came with some concerns.

Second, I knew there would be fatalities suffered by the SEAL platoon in the movie.  For those watching the movie from the outside this is just standard movie stuff, but for me those who died in the movie were connected to real buddies who have been killed.  I sort of dreaded the death and funeral scenes because they would transport me back to the all too many funerals I have attended over the last ten years.

Finally, my greatest concern had to do with people in the movie theater.  I am highly sensitive to the lack of patriotism found in our nation today.  It really bothers me when I attend events and people don't stand, or stand still, in respect for the National Anthem.  I knew I had to brace myself to listen in silence to all the know-it-all movie attenders who would be spouting their mouths about the SEAL teams following the movie.

Thankfully, I really only had to deal with the second concern.


My review of the movie.  Again, I am not sure that I can give this movie a simple review...it is far too complex from my perspective as it was not just going to the movies for fun sort of event.

First, if you have never served as a SEAL you will not get it.  Period.  You can't watch a movie or read a book and think you actually understand what the SEAL teams are all about.  To understand and know the culture, you have to have lived it.  There is simply no way to convey it any other way.

Second, this was a Hollywood movie--not a documentary lest we get confused. The scenes were fairly realistic, but the timing and choreography of events are clearly based around the storyline which is clearly that--a storyline.

The bottom line is I really enjoyed the movie.  I enjoyed being launched back into the teams for that short while.  My mind was able to fill in the blanks where the movie missed it--the camaraderie, the adrenaline of leaving an aircraft, the discipline if takes to stay quiet, the misery of transitioning from water to land, and the truly amount of lethal fire power a select few men are able to sling down range when it is needed.

Watching the action unfold, I feared the movie was glamorizing what we do in the way that the last Summer Olympics motivated half of America to start swimming laps after watching Phelps' domination in the pool.  The spectator doesn't understand the extreme amount of hours of training and sacrifice that go into the exceptional moments that come far and few between.  It is this extreme commitment that the Christian is to apply to their walk with the Lord.  As Paul says, "Suffer hardship with me, as a good soldier of Christ Jesus.  No soldier in active service entangles himself in the affairs of everyday life, so that he may please the one who enlisted him as a soldier." (2 Timothy 2:3-4).

I don't know the stats, but I am certain that the recruiters offices around the nation have been overrun with young guys that want to give it a shot.  I wonder how many guys were chipping paint and slinging slop during the 80's after enlisting to be an F-14 pilot after watching Top Gun?  I am certain this movie will have the same impact on recruiting.

As the glorification of war seemed to be reaching its pinnacle, a SEAL was killed and sort of changed the atmosphere in the theater.  I don't want to ruin the end of the movie, but I greatly appreciated the sobriety that the movie ended with.  It was hard to watch.  Flashbacks of my friend's funerals came back in living color.  While painful to watch, I was glad because this movie ended in reality.  We live in a time when reality is blurred by television, movies, and video games.  The good guys don't always survive the impossible.  I hope the ending of this movie will filter some future candidates who have no business going.

War is horrible as it decimates lives.  Unfortunately, evil is real.  We need warriors who will stand and defend the weak--this truth will remain until Christ returns.  (For more on my thoughts on combat see my most read post on "Reacting to Osama Bin Laden.")  If you saw this movie, enjoyed it, and are compelled to thank a SEAL, I would encourage you to make a donation to the SEAL Foundation which exists to serve the Naval Special Warfare Community.
Posted by Gunnar Hanson at 5:39 PM 7 comments