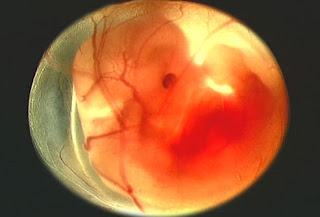 My thoughts on the Sanctity of Human Life as tomorrow, Sunday January 21, marks the 39th anniversary of Roe V. Wade. Since this date, it is estimated that 51+million babies have been aborted.  In perspective, on average per year this is about 1.5 million per year.

Last year in Japan there were approximately 20,000 deaths. Horrible. Since Roe v. Wade, 20,000 babies have been aborted every 5 days.

A few years ago I attended a doctoral seminar where a very powerful video on abortion was shown. I opted out for a number of reasons--primarily I didn't want to face the reality of what it was because of my own history. A few months after the fact, I decided I should watch it to see if it would affect me. It did. I encourage you, especially if you are pro-choice, to watch it (CLICK HERE).

The majority of Americans seem quite content living under an allusion that abortion is all about "women's rights" and claim many reasons to justify it. You may be included, I know I was--or at least that reason seemed reasonable enough. If this is you, I implore you to watch the posted video so that you gain understanding concerning the truth of abortion.  Certainly if you are pro-choice you should have no problem seeing what you endorse.

God used this seminar to shake me to my core. It culminated January 2008, as I found myself pastor of Valley Baptist Church and preaching every Sunday. The Sanctity of Human Life Sunday was fast approaching and I had to decide if I would comment on the issue.

Many factors seemed to be at play. First, I stumbled across a chapter in John Piper's book, "Brothers, We Are Not Professionals" that challenged pastors on this topic--me in particular. I felt like such a coward. Then, I realized that I was finishing First Timothy the Sunday before Sanctity of Human Life Sunday...what would I do? I had no excuses. Ultimately, I decided the right thing to do was to take a stand for the unborn and for those suffering with the scars of abortion. I would preach on the topic from a biblical vantage point. This was the hardest sermon I have ever preached. I came with great personal pain, anger, and sorrow. I have preached on this subject ever since without regrets.

In my heart I don't think that someone can remain "pro-choice" after viewing this posted video, yet I know that I am wrong because many people are involved in this "medical procedure" day in and day out and are not moved by their actions. Our conscience is truly seared concerning this subject.

There are a few things that I want to say specifically on this matter:

1. If you have been involved in abortion (both female and male), Jesus has paid the penalty for your sin. Forgiveness is available to you if you ask Him. Forgiveness and consequence are two separate matters. Once forgiven, I believe it can take many years to sort through the guilt, shame, and scars.

2. I believe aborted children are resting in the arms of God. They are safe with Him.

3. Concerning abortion today. This is murder. We must act to defend the lives of the innocent. I am not suggesting that we murder abortionist, but we must rise up and help the helpless through political means, supporting your local pro-life pregnancy clinic, reaching out to abort-intent women, along with caring for young single moms who decided to keep their kids.

To you apathetic Christian, I implore you to watch the video and ask yourself, "What does God think about this?" Do you say, "Personally, I would never do it. But, I could never tell someone else what to do." Really? Watch the video, then tell me that! Then I would encourage you to read Proverbs 24:11-12 and ask yourself, "How does this passage relate toward abortion?"

Please people, watch this video. Let it hurt. Let the tears flow. Be ignorant no more!
Posted by Gunnar Hanson at 4:18 PM 2 comments

Avoid the Appearance of Evil?

I am on a roll with Bible pet peeves.  Somewhere early in my Christian pilgrimage, I became aware that the Christian was to avoid the appearance of evil.  I didn't know where exactly this was in the Bible, but I assumed it was simply everywhere because it was a given that I was to avoid things that appeared to be evil.  No problem.  This made sense to me in my early Christian life, but I didn't realize the problem of legalism that I was naively walking into.

Evil is everywhere.  Just about everything in our culture has the potential to be sinful in any person's life.  Let me share one example of a story that comes to mind.

The story that comes to mind is highlighted by the picture above.  It is brewed root beer.  I have never had that particular brand, but I do love a good brewed root beer.  This spring our missionaries from Mongolia were in town for a few weeks and we as a church wanted to treat them real good.  So we let them go shopping and we picked up the tab.  He and I really love brewed root beer and I encouraged him to pick up a six pack or two.  It was hilarious watching the two of us carefully searching the chilled "beers" (as we affectionately called them) as they were stored right in the alcoholic section of the stores refrigerator.  We had so much fun with each other that afternoon and later that night in the cabin enjoying the "beers"!  In the cabin that night, it dawned on me that if someone was on the outside of the cabin looking in they could have easily thought the pastor and the missionary were getting loaded based on the amount of "beers" we were consuming and the amount of fun we were having.

Oh, no.  Were we in sin?  We certainly had the appearance of evil for the theoretical person looking in at us.  Were we wrong?  Where does this thought come from?  The answer is from the KJV's translation of 1 Thessalonians 5:22 which says, "Abstain from all appearance of evil."  At first glance, I would have to concede that the missionary and I were in violation of God's Word and in sin.

Let's look at a few other translations of this verse and see if some clarity can be discovered.


NKJV and NASB, "Abstain from every form of evil."

NIV, "Reject every kind of evil."

NET, "Stay away from every form of evil."

NLT, "Stay away from every kind of evil."

As I look at the other translations of this passage some clarity comes in focus.  The issue isn't appearance, it is participation with evil.  We are to avoid all forms of evil.  In my opinion this sort of changes everything as we are to avoid actual evil, not on the externals.  The concern with the idea that we are "to avoid the appearance of evil" is it creates a priority on the appearance of things--not actually on the condition of the heart which is what God is so very concerned about.  From this I suggest we guard ourselves from legalism on two fronts: 1) how we live our lives...focus on your actual walk with the LORD, not simply the appearance you are projecting, and 2) guard yourselves from casting judgment on others without know all the facts.
Posted by Gunnar Hanson at 5:34 PM 7 comments